skip to main | skip to sidebar

“Ladyfest: The ideas we want in a festival”. An interview with Fege from Pavia, Italy. Fege talks about the real meaning of girl power in this day and age.

When did you first hear about Ladyfest?

I started to listen to riot grrrl music when I was a little girl. Then Allison Wolfe from Bratmobile organized a Ladyfest, so I heard.

If you were to describe Ladyfest to someone who had never heard of it before, what would you say?

I would say that it is organized by girls; this is the main difference between Ladyfest and other festivals. It has the ideas that we want in a festival.

Do you think that Ladyfest promotes a certain type of feminism?

Ladyfest comes from positive thinking about girls and their lives – such as being independent, or about sisterhood; it is about doing stuff with other girls, sharing feelings and ideas and the difficult things in life. I think this is the main issue.

Why did you decide to hold a Ladyfest in Pavia?

When I was at Ladyfest in Turin, the ambience was so cool and it was so well organized. There was a good feeling between people. So, I thought, “Well, why not?” I have good girl friends that I really admire for what they are doing, I also thought it would be cool to involve my girl friends in this stuff.

Do most of the organizers from your Ladyfest know each other already?

Yeh. It is mainly me and my former bassist and my actual drummer! There’s a few other people…there’s a group of other girls, like political activists. But we are the main people, we are three.

Your Ladyfest is happening next week. How do you feel?

Excited, anxious. I hope it works because we organized it just in a small city, which is kind of weird because it is not a big city like Milan or Rome. Our city is a University city full of young people and students, which is good, but there isn’t really much cultural stuff to do. It’s like a gamble.

What’s happening at your fest?

We’re gonna have workshops on self-defence, creative writing, and there is a presentation on some book – by a girl writer, of course. And a workshop for micro-music, playing music with toys, like Atari or Nintendo. It’s a kind of electronic music and it’s really fun.

What’s your favourite memory from another Ladyfest you’ve visited?

Can you tell me more about the DIY aspect of Ladyfest…

It is the main idea of Ladyfest. Our Ladyfest must be like that: we didn’t have sponsors; we just raised the money from benefits. We strongly want to be independent, which I feel is really important. If you are independent, you can do what you want. If you’re not, you are always bonded; you have to do what people what you to do. And in this way [DIY] you can really express your ideas.

What venues have you chosen for your fest?

We have a squat and a small café – a café for writers, or something like that – and a normal club where they do concerts. The club is really nice and they have the backline, which is really important, as they share the backline for all the bands. It’s cool because the bands which are touring just have to bring themselves now.

What do Ladyfests do that empowers people?

I think they can do a lot because you have the chance to talk about things that normally you do not talk about. If you’re a little girl and you’re a rebel and feel alone in this world, because you don’t meet people like you, then it’s nice to meet people like you. It’s really important to talk about this stuff because it’s something really crucial. We can talk about [the pressure to be thin, for example] in a free way. I think it can really empower people, I hope so.

Do you see any links between what Ladyfest does and what older feminists did with consciousness-raising?

A few links. But Ladyfest is feminism plus DIY plus other stuff. Older feminists do not have this concept of DIY, so it is something more. I don’t think there are many connections. I think we are building up a new idea of being girls, and sharing feelings and sharing ideas, which is really cool; if we can really share.

When you say ‘girls’, do you mean girls or young women?

Did you have any discussions about how you wanted to represent Ladyfest visually?

Yeh. Normally on concert posters you see girls half-naked with bikinis and stuff. We decided not to do that because it would not be a good image. In the beginning, we got the image of some Flapper actress from the 1920s; because the thing about feminism and to be really smart. So we have some images like Joan Crawford because we love the way they look; you know, with short hair and really free. But now, in the poster, we have a picture of my grandmother on a motorcycle! Unfortunately she died six years ago, but I think she would be really proud.

What’s your dream for your Ladyfest?

My dream is that a seven-year old girl comes and says “I will organize the next Ladyfest”. 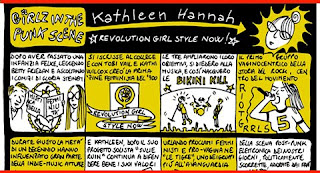 And here, two videos of the awesome Agatha (fri 12) and TV Buddhas (sat 13) thanks to Ketta


TV Buddhas (you can't see it,but you can feel it) 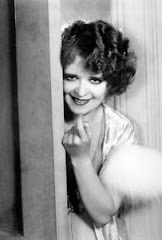